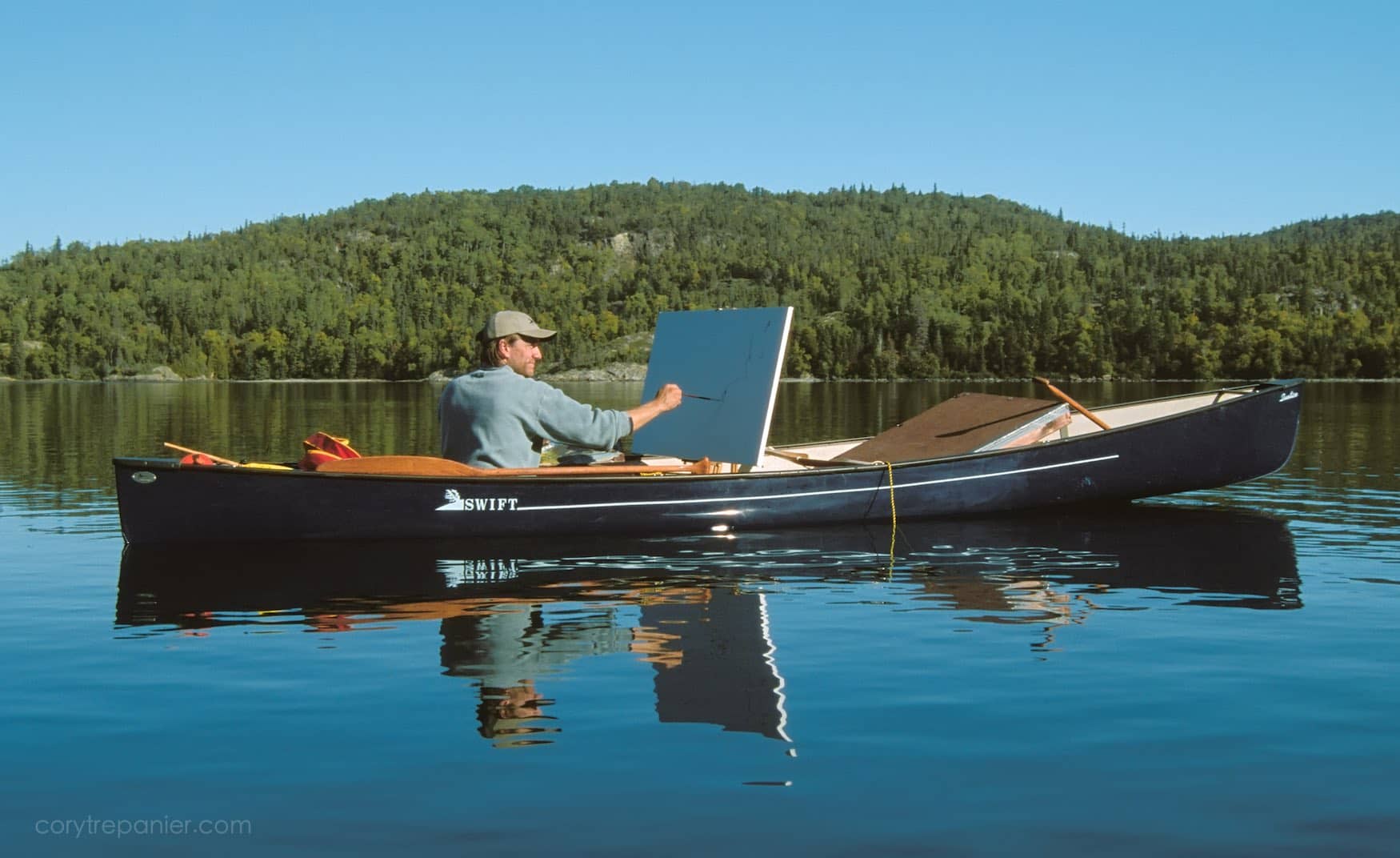 We hit the water a little late upon our arrival at Lake Superior Provincial Park.

I was first introduced to Lake Superior when I went there to execute a commission for the Ministry of Natural Resources. The painting was called “The Living Coast.”

During my research for the painting, Janet, Andie and I spent time in this park, painting, scuba diving and canoeing. The variety and beauty we saw in the short distance we traveled amazed me. Because we only had a few days to do the research, and because we brought scuba gear along, we went by boat. But we did manage an evening paddle in Sinclair Cove that brought us in front of the pictographs at Agawa on a mist filled evening. When I look back, I believe that it was this evening that birthed the desire to return and really focus on painting this incredible part of Ontario.

For this trip we put in at Old Woman Bay, in the upper part of this large park. This well-known piece of Lake Superior is familiar to anyone who has traveled up Highway 17.

In fact, one of the most dramatic views of Superior’s rock precipices is from the highway.

This area of the lake is also know to many canoeing enthusiasts through the films of Bill Mason. Bill was known for his many outdoor and canoeing films, especially the Path of the Paddle series, which were a great blend of paddling instruction and outdoor inspiration. I first saw these videos as a teenager, when I borrowed them from the local library. More than great instruction, these films sparked a desire in me to explore the wilderness by canoe.

The first strokes of our paddles sliced through the calm water that evening as we headed toward Brule Harbour, about an hour north of the bay. We left later than we should have, but we were rewarded for our tardiness with a magnificent sunset and afterglow that lit most of our way. We arrived at our site in the dark giving the area we were to camp in an aura of mystery.

At first light, I was out in the canoe looking for a spot to paint. The waters were calm, unusually quiet, as a matter of fact, for late September. Because of the calm conditions, I was able to paddle in very close to the shores where I was treated to incredible clear waters that extended the visible landscape to dozens of feet below the surface. Sometimes, when I’m surrounded by so much beauty, I find it hard to settle on a scene to paint. Just as I think I have a composition, something catches my eye a little further over and I go to take a look. If I’m not careful, I could spend the whole day just looking and looking, and never actually painting.

I caught myself doing a little of this as I canoed around first thing in the morning. I climbed on the island for a different vantage point, then returned to the canoe and settling down to work. This time, it was time well spent and when I finally settled on a scene, I decided to pull out the biggest canvas that I could bring on a trip like this; 22″ x 40″.

The choice to paint on a small panel or larger canvas is often determined by the landscape itself, and whether or not it just feels like it needs to be large. I am also restricted by my mode of transportation. If I’m hiking through the woods, it’s just not feasible to carry a large canvas along.

Of course, there are some paintings that just have to be really big so I usually reserve these for back in the studio, where I can use a small study in the field (and photo reference) to help me execute the larger painting.

After lunch, a boat pulled in to our bay for a visit. This seemed odd because, to this point, we had seen nobody else on the water. (That’s one great thing about fall travel!).

It turned out to be Joel Cooper and Carol Dersch, whom we had both met earlier up in Wawa. They caught wind that we might be in the area as they were out enjoying an afternoon ride, and dropped in for a visit. Joel works for the MNR in Wawa and Carol is the head naturalist for Lake Superior Provincial Park..

It didn’t take long before we were headed out for a little ride up the coast, with Carol – though off duty – being generous enough do a little park interpretation for us. It also allowed me to scout the area for future work, covering more ground in that hour than I could by canoe in a day.

This weekend also marked the departure of Rick, our guide from Naturally Superior Adventures, who by this point we had begun to know quite well. A photographer friend of mine, Simon Bois, had also joined us for the weekend. When Sunday came – the day we had originally planned for our departure – I found I just wasn’t ready to go yet.

Simon had commitments in Toronto, so he and Rick paddled back with the kayak, and we were back to just the four of us and the canoe.

Once Rick left, I became aware of something that had happened quietly during the time he was with us I have always been self-directed and self-sufficient on my earlier trips into the woods. Because we had Rick as our guide during this part of the trip, I realized I had slowly let my guard down. I had become less concerned with daily chores, basic camping, and even safety. It’s understandable. That’s the beauty of having a guide. He is there to take care of these things so that you can enjoy the outdoor experience further. When he left, I was caught off guard, suddenly feeling the full weight of the responsibility of leading my family safely home.

When our friends were out of site, Janet and I looked at each other, and then quickly began to gather firewood, and finished setting up camp again, almost feeling a little out of practice.

In all, the guiding experience was a very positive one. In addition to the break from cooking and doing dishes (which benefited Janet especially), I was able to get out to some locations that I would not have been able to bring the kids to because of weather, terrain and timing. As well, I picked up some great camping technique and ideas that I will certainly use on future trips. At the same time there is satisfaction to pursuing the outdoors independently. So it’s a matter of finding the right mix for your enjoyment of camping and other recreation in the great outdoors.

Afternoon wore on and I began to consider where to explore and paint next. Entrance Island, just south of our campsite and across an exposed gap, had caught my eye earlier in the day while on the boat. I prepared my gear for a late afternoon trip, that later turned out to is an eerie evening trip.