Up Here Magazine Article Part 3 of 7: WEST TO EAST 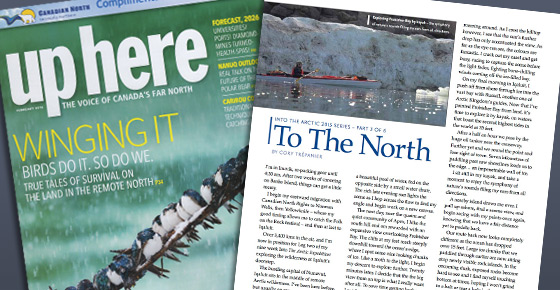 30 Jan Up Here Magazine Article Part 3 of 7: WEST TO EAST

Posted at 15:50h in Media by oils@trepanieroriginals.com 0 Comments
Share

Cory’s Into The Arctic: The Last Chapter expedition field journals were published as a series in Canadian North airline’s Up Here Magazine beginning in November 2015. Here is part 3. Published in the January 2016 issue.

WEST TO EAST
by Cory Trépanier

I’m in Inuvik, re-packing gear until 4:30 am. After two weeks of canoeing on Banks Island, things can get a little messy.

I begin my eastward migration with Canadian North flights to Norman Wells, then Yellowknife – where my good timing allows me to catch the Folk on the Rock festival – and then at last to Iqaluit.

Over 3,400 kms in the air, and I’m now in position for Leg two of my nine week Into The Arctic Expedition: exploring the wilderness at Iqaluit’s doorstep.

The bustling capital of Nunavut, Iqaluit sits in the middle of remote Arctic wilderness. I’ve been here before, but usually on my way to somewhere else. Now I’m keen to spend some time exploring the region with my paints.

Dust kicks up as I step out of the Suburban onto the aptly named “Road To Nowhere”. Iqaluit-based Arctic Kingdom is lending a hand with accommodations and a ride out of town with company guide Mikaela.

Half an hour later, the river we’ve been following expands into a beautiful valley, cascading through a series of rock-lined plunges. A short hike reveals a beautiful pool of water, fed on the opposite side by a small water chute. The rich late evening sun lights the scene as I hop across the flow to find my angle and begin work on a new canvas.

The next day, near the quaint and quiet community of Apex, I hike the south hill and am rewarded with an expansive view overlooking Frobisher Bay. The cliffs at my feet reach steeply downhill toward the ocean’s edge, where I spot some nice looking chunks of ice. Like a moth to the light, I begin my descent to explore further. Twenty minutes later, I decide that the the big view from on top is what I really want after all. To save time getting back up, I opt for a short cut up the bluff. It goes well until about the 3/4 mark. That’s when things get uncomfortably steep. I have a clear route almost within reach, but the camera pack on my chest pushes me away from the cliff, making the situation precarious. I look down at the elevation I’ve gained, consider how this could end very badly, and make my retreat.

I kick myself as I hike back up the hill the long way around. I’m now in the shadows, and all I can think is how I’ve used up the best light of the day roaming around. As I crest the hilltop however, I see that the sun’s further drop has only accentuated the view. As far as the eye can see, the colours are fantastic. I crack out my easel and get busy, racing to capture the scene before the light fades, fighting bone-chilling winds coming o the ice-filled bay.

On my final morning in Iqaluit, I push off from shore through ice into the vast bay with Russell, another one of Arctic Kingdom’s guides. Now that I’ve painted Frobisher Bay from land, it’s time to explore it by kayak, on waters that boast the second highest tides in the world at 33 feet.

After a half an hour we pass by the huge oil tanker near the causeway. Further yet and we round the point and lose sight of town. Seven kilometres of paddling past raw shorelines leads us to the edge… an impenetrable wall of ice.

I sit still in my kayak, and take a moment to enjoy the symphony of nature’s sounds filling my ears from all directions.

A nearby island draws me over. I pull up ashore, find a serene view, and begin racing with my paints once again, knowing that we have a fair distance yet to paddle back.

Our route back now looks completely different as the ocean has dropped over 15 feet. Large ice chunks that we paddled through earlier are now sitting atop newly visible rock islands. In the oncoming dusk, exposed rocks become hard to see and I find myself touching bottom at times, hoping I won’t grind to a halt or tear a hole in the soft shelled kayak. A stiff wind picks up, whipping the water into a mild frenzy until we round the big exposed point and see Iqaluit once again, lit up against the dark sky.

One last sustained push across the open bay against a biting cross-wind burn my shoulders until I feel bottom once again. This time it’s ok… because we’ve made it back to Iqaluit.