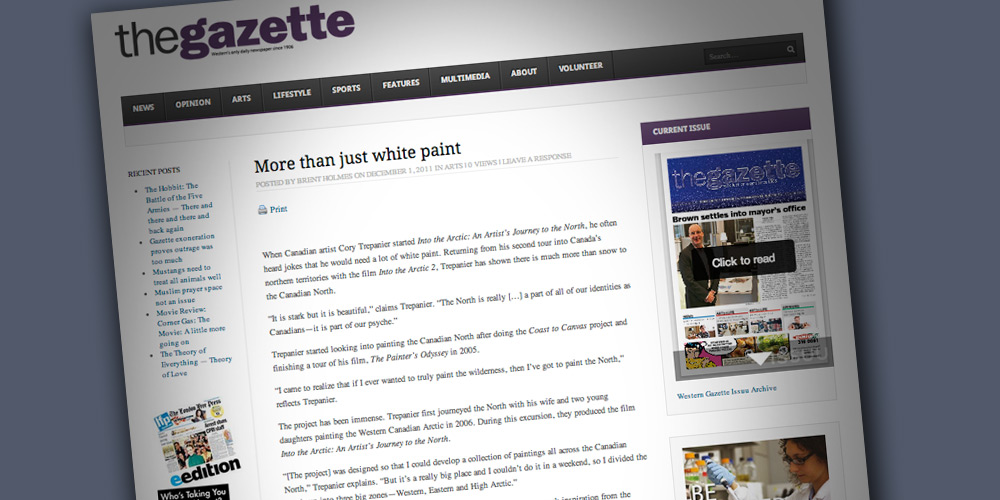 Posted at 22:23h in Media by oils@trepanieroriginals.com 0 Comments
Share

Read on The Gazette website online or read below:

When Canadian artist Cory Trepanier started Into the Arctic: An Artist’s Journey to the North, he often heard jokes that he would need a lot of white paint. Returning from his second tour into Canada’s northern territories with the film Into the Arctic 2, Trepanier has shown there is much more than snow to the Canadian North.

“It is stark but it is beautiful,” claims Trepanier. “The North is really […] a part of all of our identities as Canadians—it is part of our psyche.”

Trepanier started looking into painting the Canadian North after doing the Coast to Canvas project and finishing a tour of his film, The Painter’s Odyssey in 2005.

“I came to realize that if I ever wanted to truly paint the wilderness, then I’ve got to paint the North,” reflects Trepanier.

The project has been immense. Trepanier first journeyed the North with his wife and two young daughters painting the Western Canadian Arctic in 2006. During this excursion, they produced the filmInto the Arctic: An Artist’s Journey to the North.

“[The project] was designed so that I could develop a collection of paintings all across the Canadian North,” Trepanier explains. “But it’s a really big place and I couldn’t do it in a weekend, so I divided the Arctic up into three big zones—Western, Eastern and High Arctic.”

Into the Arctic 2 follows Trepanier as he returns to the North, this time to seek inspiration from the Eastern Arctic. Trepanier didn’t bring his family along this time as the three-month journey was much more dangerous—he had to sleep with a shotgun to protect himself from polar bears.

Trepanier also had to carry a pack weighing close to 110 pounds containing both his painting and recording equipment over the vast northern landscapes. The journey took a great deal of time as he could only travel so far before having to take a break.

“It took so long to get close that by the time we get there it is always a struggle of, “Do I start to paint?” which means we are not going to get any closer,” remarks Trenpanier. “By the time we got to where we wanted to be, it was about five days in total from when we left to the time I started my first painting.”

Finding the perfect location could take days as Trepanier sometimes found that the view of a certain landscape was better from a previous location requiring a strenuous return to the original location. Painting could also present even more challenges.

“On occasion I have to deal with the sand that is blowing into the paint, or tremendous hordes of mosquitoes, or the cold when you’re trying to paint a glacier and your hand is freezing. All the while we are filming this too,” says Trepanier.

Into the Arctic 2 premiered at the Empire Theatre in Caledon, Ontario on October 19 and has since gone on tour across Canada. Trepanier hopes the film will encourage people to pursue their passions and recognize the importance of the arctic landscape.

“It is a changing landscape, and I feel that what I’m doing as a painter is preserving it in a way that will be around potentially for generations,” says Trepanier. “It is important to me that my work can do more than just entertain, but to inspire people to take care of places.”

Into the Arctic 2 is coming to London and will be screening at the Hyland Cinema as a special one-time presentation on Friday, December 2.