In The Hills Magazine 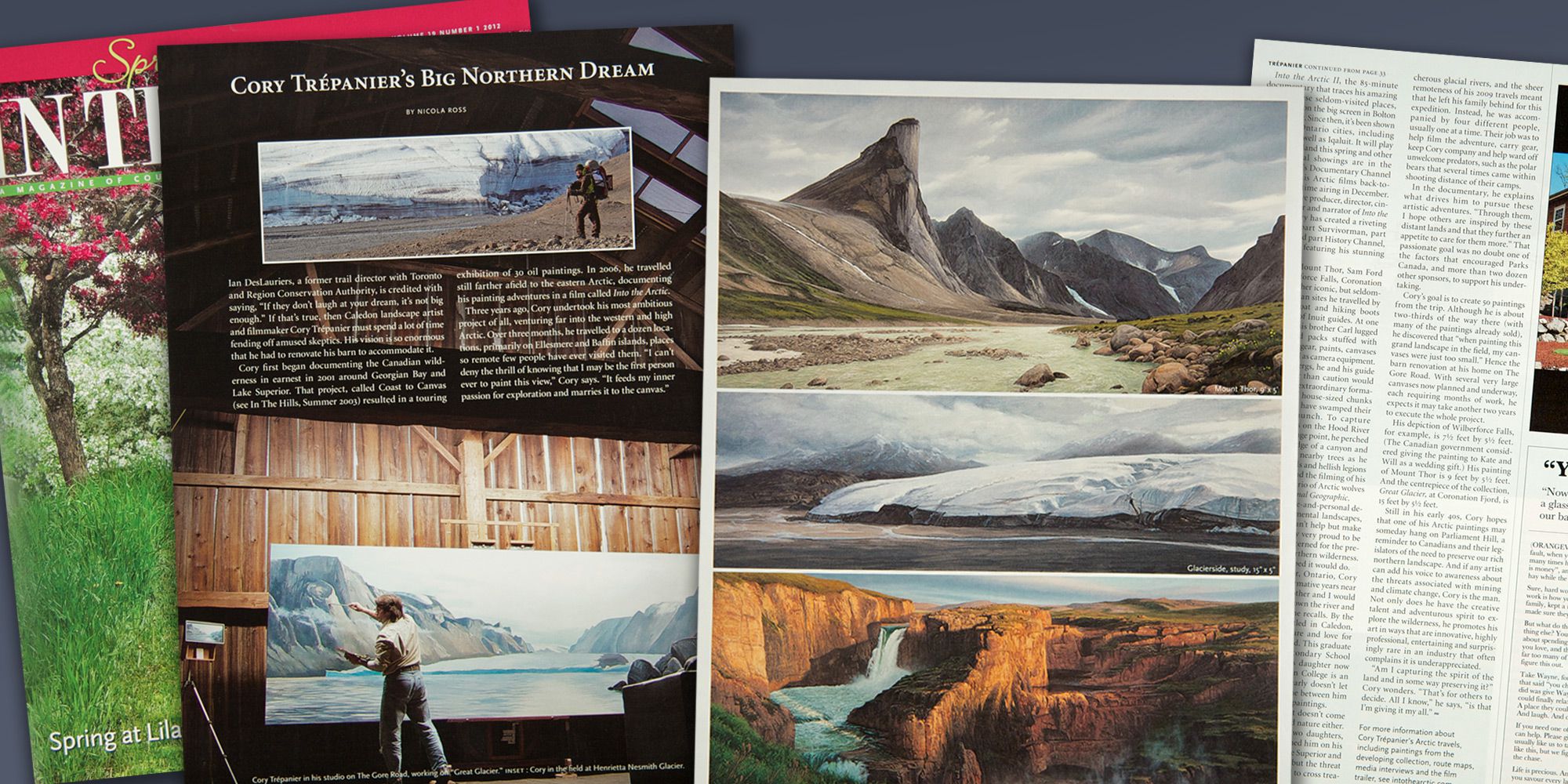 23 Mar In The Hills Magazine

Posted at 03:21h in Media by oils@trepanieroriginals.com 0 Comments
Share

Read on the In The Hills website or read below:

In DesLauriers, a former trail director with Toronto and Region Conservation Authority, is credited with saying, “If they don’t laugh at your dream, it’s not big enough.” If that’s true, then Caledon landscape artist and filmmaker Cory Trépanier must spend a lot of time fending off amused skeptics. His vision is so enormous that he had to renovate his barn to accommodate it.

Cory first began documenting the Canadian wilderness in earnest in 2001 around Georgian Bay and Lake Superior. That project, called Coast to Canvas (see In The Hills, Summer 2003) resulted in a touring exhibition of 30 oil paintings. In 2006, he travelled still farther afield to the eastern Arctic, documenting his painting adventures in a film called Into the Arctic. Three years ago, Cory undertook his most ambitious project of all, venturing far into the western and high Arctic. Over three months, he travelled to a dozen locations, primarily on Ellesmere and Baffin islands, places so remote few people have ever visited them. “I can’t deny the thrill of knowing that I may be the first person ever to paint this view,” Cory says. “It feeds my inner passion for exploration and marries it to the canvas.”

Into the Arctic II, the 85-minute documentary that traces his amazing trip to these seldom-visited places, premiered on the big screen in Bolton last October. Since then, it’s been shown in seven Ontario cities, including Ottawa, as well as Iqaluit. It will play in New Zealand this spring and other international showings are in the works. CBC’s Documentary Channel gave both his Arctic films back-to-back prime-time airing in December.

As executive producer, director, cinematographer and narrator of Into the Arctic II, Cory has created a riveting film that is part Survivorman, part travelogue and part History Channel, all the while featuring his stunning oil paintings.

To get to Mount Thor, Sam Ford Fjord, Wilberforce Falls, Coronation Glacier and other iconic, but seldom-visited Canadian sites he travelled by float plane, boat and hiking boots with the help of Inuit guides. At one point, he and his brother Carl lugged hundred-pound packs stuffed with food, camping gear, paints, canvases and easel, as well as camera equipment. To paint icebergs, he and his guide moved in closer than caution would dictate as these extraordinary formations calved off house-sized chunks of ice that could have swamped their small motor launch. To capture Wilberforce Falls on the Hood River from a lofty vantage point, he perched himself on the edge of a canyon and tied his easel to nearby trees as he battled gusty winds and hellish legions of mosquitoes. And the filming of his encounter with a trio of Arctic wolves is worthy of National Geographic.

With its up-close-and-personal depictions of monumental landscapes, Into the Arctic II can’t help but make you simultaneously very proud to be Canadian and concerned for the preservation of the northern wilderness. Exactly as Cory hoped it would do.

Born in Windsor, Ontario, Cory spent some of his formative years near North Bay. “My brother and I would get in a dinghy, go down the river and return after dark,” he recalls. By the time his family settled in Caledon, his spirit of adventure and love for nature were ingrained. This graduate of Humberview Secondary School in Bolton (which his daughter now attends) and Sheridan College is an avid canoeist and clearly doesn’t let physical exertion come between him and the subject of his paintings.

To a lesser extent, it doesn’t come between his family and nature either. His wife, Janet, and two daughters, Sydney and Andie, joined him on his earlier ventures on Lake Superior and in the Western Arctic, but the threat of polar bears, the need to cross treacherous glacial rivers, and the sheer remoteness of his 2009 travels meant that he left his family behind for this expedition. Instead, he was accompanied by four different people, usually one at a time. Their job was to help film the adventure, carry gear, keep Cory company and help ward off unwelcome predators, such as the polar bears that several times came within shooting distance of their camps. In the documentary, he explains what drives him to pursue these artistic adventures. “Through them, I hope others are inspired by these distant lands and that they further an appetite to care for them more.” That passionate goal was no doubt one of the factors that encouraged Parks Canada, and more than two dozen other sponsors, to support his undertaking.

Cory’s goal is to create 50 paintings from the trip. Although he is about two-thirds of the way there (with many of the paintings already sold), he discovered that “when painting this grand landscape in the field, my canvases were just too small.” Hence the barn renovation at his home on The Gore Road. With several very large canvases now planned and underway, each requiring months of work, he expects it may take another two years to execute the whole project.

His depiction of Wilberforce Falls, for example, is 7½ feet by 5½ feet. (The Canadian government considered giving the painting to Kate and Will as a wedding gift.) His painting of Mount Thor is 9 feet by 5½ feet. And the centrepiece of the collection, Great Glacier, at Coronation Fjord, is 15 feet by 5½ feet.

Still in his early 40s, Cory hopes that one of his Arctic paintings may someday hang on Parliament Hill, a reminder to Canadians and their legislators of the need to preserve our rich northern landscape. And if any artist can add his voice to awareness about the threats associated with mining and climate change, Cory is the man. Not only does he have the creative talent and adventurous spirit to explore the wilderness, he promotes his art in ways that are innovative, highly professional, entertaining and surprisingly rare in an industry that often complains it is underappreciated.

“Am I capturing the spirit of the land and in some way preserving it?” Cory wonders. “That’s for others to decide. All I know,” he says, “is that I’m giving it my all.”