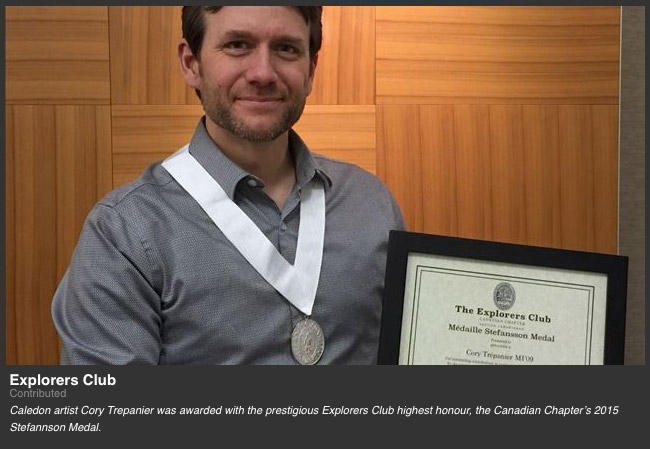 Posted at 18:54h in Media by oils@trepanieroriginals.com 0 Comments
Share

Caledon based artist Cory Trepanier has joined the likes of James Cameron and Neil Armstrong as one of North America’s most esteemed explorers, and he’s got the medal to show for it.

The Explorers Club, which dates back to 1904, is an international multidisciplinary professional society dedicated to the advancement of field research and the ideal that it is vital to preserve the instinct to explore.

While Trepanier has been a member of the invite-only club since 2009, this year he was awarded with the Explorers Club Canadian Chapter’s 2015 Steffanson Medal for outstanding contributions to exploration and public education through his artwork and documentaries.

In an interesting twist of events, Trepanier managed to be part of a threefold coincidence in which he actually painted a landscape, Castel Bay, on one of his expeditions which was named by Vilhjalmur Stefansson, whom the medal owes its title to.

Steffanson was an early Canadian Arctic explorer himself who gave Castel Bay its name as a tribute to another fellow explorer, Aarnout Castel.

“I am truly honoured,” Trepanier told The Enterprise.

Trepanier has been painting, filming and exploring Canadian wilderness for the better part of two decades.

For his Into The Arctic project, he has undertaken four extensive Arctic expeditions in an effort to create an unprecedented collection of original northern oil paintings.

The collection now numbers more than 50 oil paintings from some of the most remote corners of the Arctic, many of them never before captured on canvas.

He also has a third film currently in post-production.

Trepanier will be hosting an open house at his studio on The Gore Road this Saturday, for the first time since December.

The open house will feature his Glacierside painting, which has hung at the Canadian Embassy in Washington for the last year.

Trepanier will have a number of the 50 pieces that will be heading out for a North American ‘Into the Arctic’ tour in 2017, a 20 minute reel of footage from last summer’s expedition in the Great White North and a seven by 10 foot map of Canada with small paintings posted on it so that viewers can put together the artwork with the location that it features.

Additionally, for the first time ever, Trepanier will have original pencil sketches done in the field since the infancy of the project for sale.

For more information about Trepanier and his arctic adventures, check out www.trepanieroriginals.com

Danielle Marr is a reporter with the Caledon Enterprise. You can reach her at dmarr@caledonenterprise.com. Follow her on Twitter @DanielleAMarr.