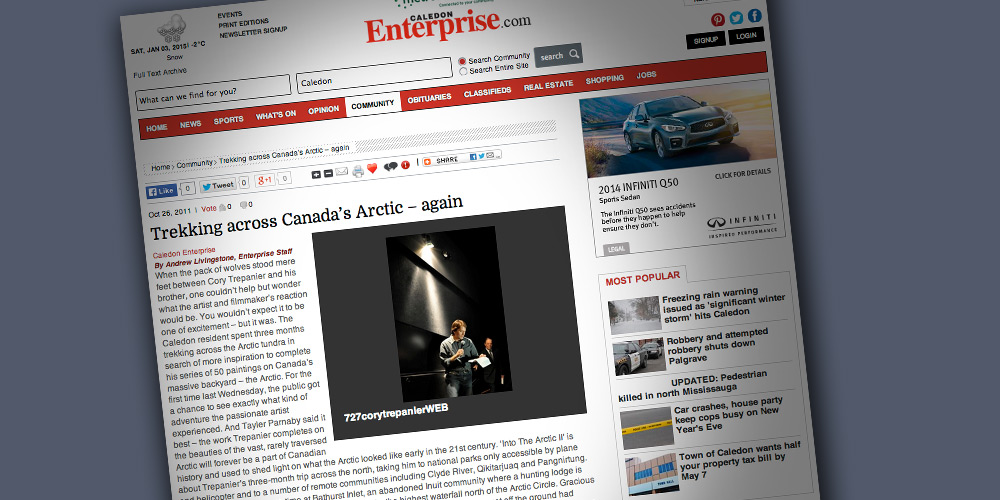 Posted at 21:46h in Media by oils@trepanieroriginals.com 0 Comments
Share

By Andrew Livingstone, Enterprise Staff
When the pack of wolves stood mere feet between Cory Trepanier and his brother, one couldn’t help but wonder what the artist and filmmaker’s reaction would be. You wouldn’t expect it to be one of excitement – but it was. The Caledon resident spent three months trekking across the Arctic tundra in search of more inspiration to complete his series of 50 paintings on Canada’s massive backyard – the Arctic. For the first time last Wednesday, the public got a chance to see exactly what kind of adventure the passionate artist experienced. And Tayler Parnaby said it best – the work Trepanier completes on the beauties of the vast, rarely traversed Arctic will forever be a part of Canadian history and used to shed light on what the Arctic looked like early in the 21st century. ‘Into The Arctic II’ is about Trepanier’s three-month trip across the north, taking him to national parks only accessible by plane and helicopter and to a number of remote communities including Clyde River, Qikitarjuaq and Pangnirtung. Trepanier also spent some time at Bathurst Inlet, an abandoned Inuit community where a hunting lodge is now located. From there, he visited Wilberforce Falls, the highest waterfall north of the Arctic Circle. Gracious in his speech before the screening, Trepanier said the project never would have got off the ground had people not been willing to purchase his Arctic collection – before he even finished a piece. “It’s a celebration about an incredible part of our country,” he said, adding those writers, artists and videographers close to him helped make the project the beautiful display of a breathtaking and all-too-real Canadian Arctic it turned out to be. “It helped make the story that much stronger.” Trepanier trekked to Ellesmere Island where he spent weeks in Quittinirpaaq National Park, collecting inspiration and small canvases capturing the serene and captivating natural wonders of the high Arctic. Simirlik National Park on Baffin Island was another stop for the artist. As could be expected when traversing the rugged and mostly-unknown terrain of the north – to non-Inuit coming to the region – there was no shortage of tense moments. From the potential of a large iceberg flipping over and sucking their boat under, to almost daily polar bear sightings to an up-close and personal experience with a pack of wolves – and of course, the unpredictable Arctic weather – Trepanier ventured where many Canadians will never get to see in their lifetime. And through his paintings and films, he  is opening Canadians up to the majestic, 1.2 million square-kilometre world of the Arctic. “It’s the experience that I hope will work its way into the paintings,” he said of experiencing the Arctic firsthand. Trepanier said once the paintings are complete he plans to take them North to the Nunavut capital of Iqaluit for a showing, something he said his airline sponsor, Canadian North, is interested in being a part of.