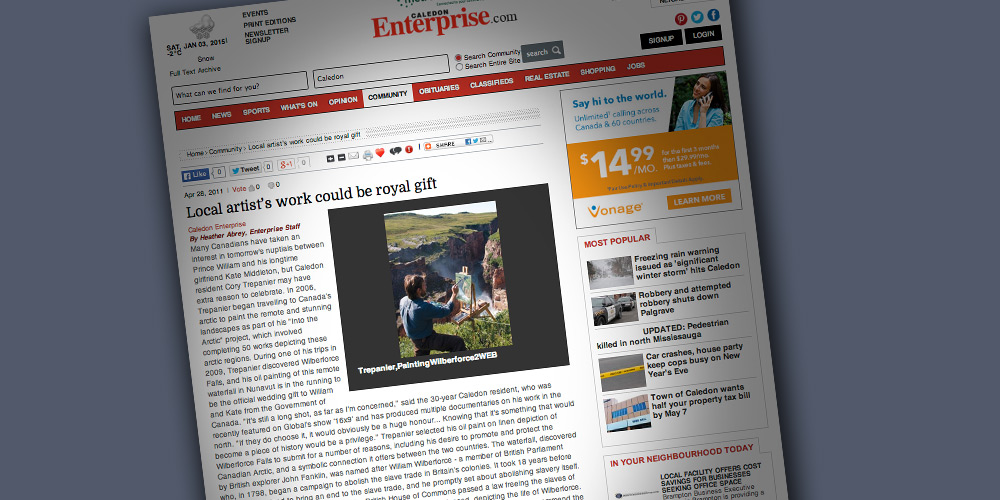 Posted at 21:59h in Media by oils@trepanieroriginals.com 0 Comments
Share

By Heather Abrey, Enterprise Staff
Many Canadians have taken an interest in tomorrow’s nuptials between Prince William and his longtime girlfriend Kate Middleton, but Caledon resident Cory Trepanier may have extra reason to celebrate. In 2006, Trepanier began travelling to Canada’s arctic to paint the remote and stunning landscapes as part of his “Into the Arctic” project, which involved completing 50 works depicting these arctic regions. During one of his trips in 2009, Trepanier discovered Wilberforce Falls, and his oil painting of this remote waterfall in Nunavut is in the running to be the official wedding gift to William and Kate from the Government of Canada. “It’s still a long shot, as far as I’m concerned,” said the 30-year Caledon resident, who was recently featured on Global’s show ‘16×9’ and has produced multiple documentaries on his work in the north. “If they do choose it, it would obviously be a huge honour… Knowing that it’s something that would become a piece of history would be a privilege.” Trepanier selected his oil paint on linen depiction of Wilberforce Falls to submit for a number of reasons, including his desire to promote and protect the Canadian Arctic, and a symbolic connection it offers between the two countries. The waterfall, discovered by British explorer John Fanklin, was named after William Wilberforce – a member of British Parliament who, in 1798, began a campaign to abolish the slave trade in Britain’s colonies. It took 18 years before Wilberforce helped to bring an end to the slave trade, and he promptly set about abolishing slavery itself. Three days before his death in 1833, the British House of Commons passed a law freeing the slaves of Britain and the colonies. In 2006, the film ‘Amazing Grace’ was released, depicting the life of Wilberforce. It wasn’t actually until Trepanier had returned from his trip to the Arctic and had someone recommend the film that he learned the history behind the name. “I watched the film, and it was so inspiring to see the story of this guy’s life and what he did, and how dedicated he was and used his position to make some changes in the world by abolishing slavery,” he said. In fact, Wilberforce was posthumously honoured with a burial and statue in Westminster Abbey, where William and Kate will walk down the aisle and take their vows. “I could not think of a more ideal gift for this particular occasion,” said Trepanier. The possible selection of his painting as the official wedding gift would also help the artist to further his goals of shining a light on Canada’s arctic, and hopefully obtaining a protected status for the falls through a heritage or provincial park designation. “It’s an opportunity on an international scale to present our Canadian north,” he said. “Few people have heard of Wilberforce Falls.” The full size 5’6″ by 7’6″ oil on linen painting is not yet complete and takes about three months in total, not including time spent on location, but would be ready in time for the Royal visit to Canada, should it be selected. “In the past whenever they’ve made announcements for gifts, such as the birch bark canoes they’ve done in the past, they’ve announced the gifts and then delivered them later,” said Trepanier. “It would be ready by the time they came here.” Still, it’s not clear when the selection will be announced, whether tomorrow, on the day of the wedding, or at a later date. Nor is it clear how many gifts are still in the running, or what entry might be at the head of the pack. “Of course, they may just choose something else completely,” the local artist told The Enterprise. “They haven’t tipped their hand one way or the other.” But one can hope that this little piece of Canada’s arctic, and of Caledon, will be selected as the official royal wedding gift. To see more of Trepanier’s work or learn about his documentaries visit www.trepanieroriginals.com.